The importance of the energy sector is understood as the investment in the power sector is the highest every year. The legal framework of the Energy Charter is quite one-sided and unbalanced. It is a legal trap for the host state in the name of conflict resolution. Therefore, to mitigate the social, political and economic unrest, the Electricity and Energy Sector Immunity Act-2010 should oppose as well as Bangladesh should not sign the Energy Charter in the end. Because, many things of energy charter and energy policy is contradictory. Therefore, we call upon the young generation to oppose it. On August 4, 2022, on Thursday, the speakers said these things in a dialogue with NGO representatives at Consumers Association of Bangladesh (CAB) at Tafazzal Hossain Manik Mia Hall of National Press Club.

The dialogue was chaired by the Senior vice-president and energy advisor of Consumers Association Bangladesh (CAB) Prof. Dr. M. Shamsul Alam and the welcome address was given by the president of Consumers Association Bangladesh (CAB) Golam Rahman and the article was presented by the professor of International Relations Department of Dhaka University Mohammad Tanjimuddin Khan.

Tanzimuddin Khan professor of International Relations Department  at Dhaka University explained how the Energy Charter Treaty is risky for the country’s energy sovereignty.

He said, section-18 of the treaty and its declaration contradicts each other. Though section-18 ensured the right and sovereignty on energy of the signatory countries but other sections are controversial. Therefore, it has to be ensured that sovereign policy won’t hamper the other sections of energy treaty. 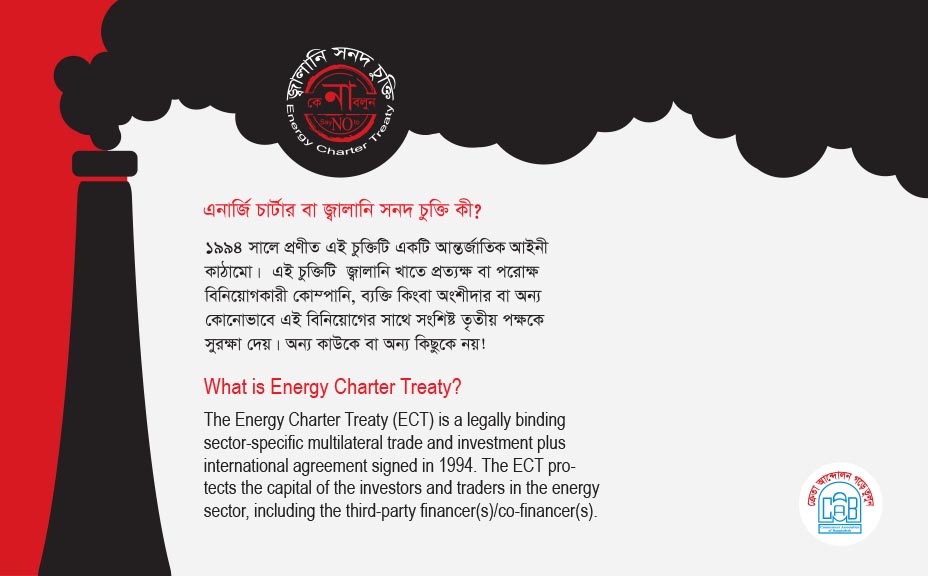 Prof Dr. M Shamsul Alam, eminent energy expert and vice-president of CAB, said the treaty was designed in a way that ensures profits interests of energy giants would never be affected no matter what the situation is in the country.

Such a beneficiary (like the giants) has already grown in our country, like the 22 families of erstwhile Pakistan who used state machineries for such undue benefit, he said.

Coming up with the example of KAPCO, he said the government is still supplying gas to KAPCO with the price fixed around 30 years ago under a contract. In this way, the country’s national capacity was threatened, which is alarming for an independent nation.